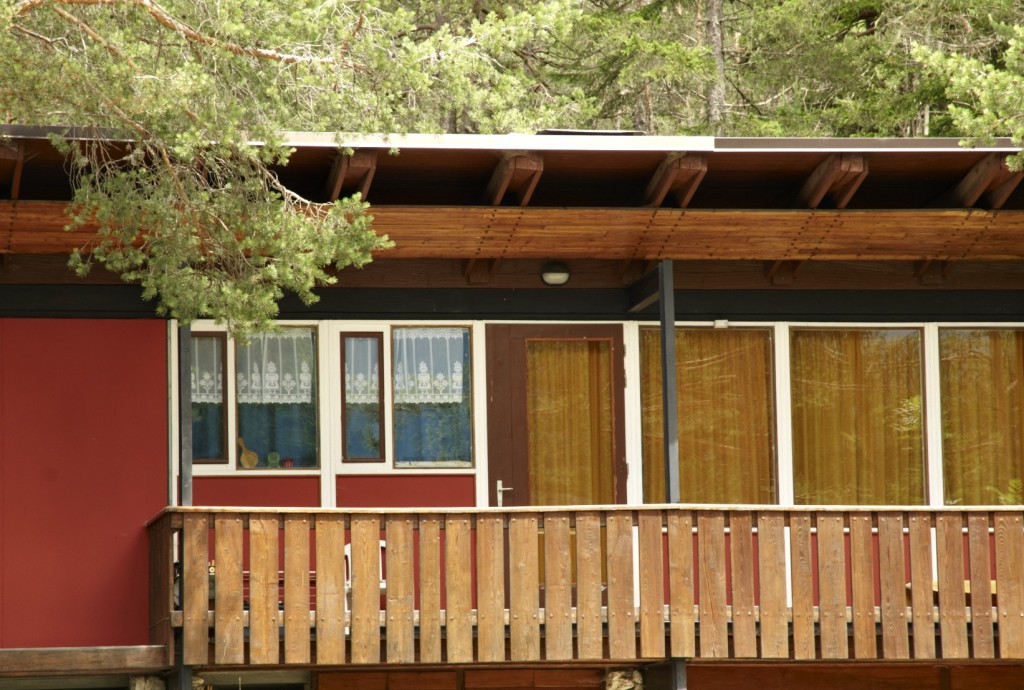 It was 1954 when the architect Edoardo Gellner found in the southern side of Mount Antelao the perfect scenario for the construction of the holiday village of the Eni group, whose head was, at the time, Enrico Mattei.

The village’s conception is an operation that, in the eyes of the visionary entrepreneur has, above all, a social value. The establishment was to become a medium, a link, between the hydrocarbons-producing company and the rest of the world: a representative place which was going to express the ideas of progress and modernity that were Eni’s signature in the 50s. Mattei identifies in Gellner the most suitably personality to give voice to these planning requirements.

Edoardo Gellner, born in Abbazia in 1909, carried out his studies in Vienna and Venice, where he graduated in architecture in 1945. Among his mentors were Josef Hoffmann, leading figure of the Vienna Secession, and Carlo Scarpa, Venetian architect and designer. The opportunities of the post WWII period take Gellner to Cortina, and there he became an expert  in architecture on mountain sites, a role that was going to give him the chance to experience as an active participant the buzz linked with the 1956 Winter Olympics.

The trust that Mattei placed in Gellner allowed the architect to plan his project using an architectural register which didn’t formally evoke the rustic architecture of a mountain area: he expressed innovation instead, morphing the construction site into a downright technological lab. The result is an urban workshop, architectural and structural, which offers numerous solutions to different planning scopes.

After rejecting some sites chosen by Eni, Gellner suggested a seemingly inhospitable location for the settlement, barren and with little vegetation. The debris and gravel at the foot of the Antelao represented a disadvantage in the eyes of the client, but a challenge in those of the architect.
Gellner saw in this site an excellent exposure to the Sun, in addition to the logistic advantages tied with its proximity to other vacation spots.
With this intervention he was going to express all his contemporaneity, creating the landscape from scratch, without directly confronting himself with the past and instead focusing on the fundamental relationship between architecture and natural environment in an exchange in which the architecture was going to be the one glorifying the landscape, instead of the other way round.

Between 1958 and 1959 the schedule of the constructions to be made was completed. The entire 200-hectare large area was ready for the implementation of services and facilities for more than 6000 people.
The urban design included a Colonia (Eng.: summer camp building) for 400 children, down at a slightly lower altitude compared to the sport facilities, a community centre at south-east, while the church is situated on a small rise. At the border of the property, there at the foot of the Antelao, the camping with permanent tents was conceived to lodge 200 boys and girls, and the remaining land was to be occupied by two hotels and by residential areas with 500 cottages for the Eni staff and their families’ stay.

The untimely passing of the client (Mattei) in 1962, as a result of a plane crash, didn’t allow the complete fulfilment of the project. The parts of the compound that were already under construction were completed, others remained only on paper. Notably, the Colonia (1955-1962), the camping (1958-1961), the side facilities (1956-1957), the church (1956-1961) were built, and the total number of cottages was halved. The hotels Corte and Botie were completed in 1962.

The winding road, full of sharp hairpin turns, is the element around which the different parts of the intervention are developed: from the main arterial road all the secondary ways that lead to the cottages, grouped in blocks of 60 to 80 units, branch off. Each group is provided with side facilities: a general store, a playground, a bar, etc.

Each one of the 270 cottages was designed to house a family, and their several different configurations were going to allow a comfortable stay to families made up of different numbers of members. Gellner not only worked out the typological and structural solutions of the houses, but also examined in depth the planning of the interiors, of the movable and unmovable furniture: pieces made serially, sturdy and easy to maintain.
The cottages are scattered in the woods, none of them prevails on the other, they all have to guarantee both the privacy of family life and the possibility of living moments of communal gathering at the same time. To avoid defacement of the landscape and to gain an optimal view of Mount Pelmo, Gellner managed to obtain from Mattei permission to bury all wiring . The cottages seem to be built on piles, with load-bearing partition walls made of decorated cement embedded to the ground, prebuilt elements which support the mono-pitched roof and the large horizontal glass walls which guarantee ample brightness inside. The result is a constellation of small, low, elongated houses perfectly in harmony with the surrounding landscape.

The discretion of the cottages lets the collective building’s volume come to light. The preponderant position of the whole project is taken up by the Church, situated on a rise at the top of a covered ramps pathway with steps made of granite and wood. The Chruch of Nostra Signora del Cadore (Eng.: Our Lady of the Cadore) displays all of its verticality through the equilateral triangular shape and a bell tower that, with its high steel steeple, gives lightness and equilibrium to the entire composition, becoming a clear impression on the landscape.

For this project, Gellner requested, in September 1956, architect Carlo Scarpa’s collaboration. The Venetian master cooperated on the artistic side, merging with Gellner’s planning: the result was going to be an absolute architectural production which involves architecture, landscape and décor.

The structure of the Church is made of a sequence of trusses braced by asymmetrical steel tie-rods, and supported by cement pillars. This structural solution dictates the nave-and-aisles layout, and allows to introduce two lateral bands of glass that run counter to the pitched roof and the concrete of the earth connections. The large windows see that nature comes into the Church, establishing an almost Franciscan relationship between landscape and architecture. The only touch of colour inside the Church is provide by the chandeliers in green and orange-tinted Murano glass, designed by Scarpa. Scarpa’s touch is easy to see in the design of the pews, of the altar and the entrance portal as well.

The most important location in the religious compound is definitely the church yard; the entire village could be seen from here, before the woods swallowed the settlement. The church yard is paved with tree stumps drowned in cement: the continuous harmony and juxtaposition between natural and manmade materials is the leading characteristic of the project. The Church was consecrated to worship in August 1961.

A roofing similar to the church’s can be found in the central pavilion of the Colonia. The ground’s configuration and the strong visual impact had excluded the possibility of building one single large edifice, instead favouring the realisation of 17 separate buildings, linked to one another by a system of connections made of sheltered ramps which revolve around the large central pavilion. The ramps are characterized by the use of lively colours and the presence of small square windows of various sizes which create striking and amusing plays of light-and-shade inside the building.

The external area was planned with a children’s size in mind: service areas, spaces for outdoor activities and a dense network of pedestrian pathways that link together the various wings of the compound. The reinforced concrete walls which circumscribe the area are perforated to allow the view of the surrounding landscape. The materials utilized and the building methods are the same as the rest of the village; in this case, just like for the cottages, Gellner perfects the inner spaces, re-creating warm and familiar environments. A great example of that are the dormitories: with a capacity of 40 children each, they’ve been organized in smaller units counting 4 beds.

The initial project by Gellner considered the realization of important service facilities for the inhabitants of the village, which included shops, cinemas and restaurants. Of this part of the planning, only the two hotels were built: the Corte apartment complex and the Cadore Hotel. The first was intended to house the staff, while the second constituted of an hospitality compound built on 6 levels, and containing 78 rooms. On the main façade cement plinths and small wooden pillars merge like in the wooden part of a “tabià”. The materials used are cement, wood, stone and copper for the covering. Each  detail is well thought out: the rooms are essential and elegant, each containing a supporting teak bench, which becomes the access step to the external terrace which is on a different level compared to the room. This way, every room is constantly well-lighted from above.
In the entry hall Gellner’s engeneering genius finds expression in the utilization of the large wooden beam. The ceiling is realised with recycled material gathered from the gauge boxes used to reinforce the concrete.

Between 1974 and 1990 the project of the social centre, conceived as the cornerstone of the entire intervention, was submitted to continuous modifications from Gellner’s part, but none of his 6 solutions was ever actualized. The following privatization of Eni entailed the selling of the entire estate.

Progettoborca is an active idea born from a peculiar attention. Progettoborca is developed by Dolomiti Contemporanee, which ever since 2011 has been working to enhance inert sites with a high potential in the territory of UNESCO's Dolomites. Progettoborca is an articulate project, whose aim is to bring people to reflect and work on the former Village, supporting its cultural enhancement, with the objective of giving a new function to some of its parts. The Project is possible thanks to the support of Minoter-Cualbu.